Clients with a very specific brief approached us, asking for driveway gates and an infill panel with a unique bulrush design, which we were only too pleased to create for them.

The good news was that their entirely bespoke gates would be no more expensive than an ‘off the shelf’ set. The project involved our graphic designer turning their design into templates for laser cutting the three separate elements of the gates and panel – as seen in the photograph.

Various engineering issues tried to thwart us, such as a sloping driveway, curved brickwork and underground access but we overcame them all, working very closely with the clients who despite having a specific idea of what they wanted, were thoroughly understanding of the constraints of engineering and safety. They now have a secure and beautiful entrance to their home. Wherever they are in the world, they can talk to people at the gates and access can be given via their mobile phone or alternatively, a keypad by the gates to trusted guests. 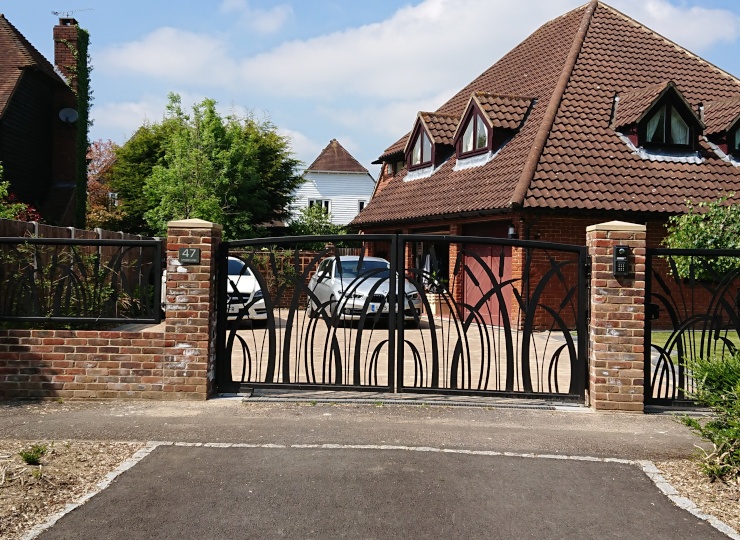 The client said: “Green Gate has done everything they said they would and we’ve now got gates we are very pleased with. We previously had a shared driveway and after we split it off from the neighbours’ we wanted some nice gates, so researched wooden, metal, manual and automatic. Once we had decided on metal, we then went out into the marketplace to find someone to create them for us and what we liked about Green Gate was that they did all the clever stuff themselves – all the engineering, whereas other firms outsourced this. They were also able to have the gates laser cut, which gives a much better look than welding which other companies talked to us about."

"We wanted personalised gates but nothing that would make it difficult to sell the house later on, so we took inspiration from the bulrushes in the lake near to us. We’re overjoyed with the gates, service and personalities we’ve met. They came straight out to us when we had a few problems at the start – the gates were getting caught on the sloping drive but it was all fixed quickly and easily."

Automating the vehicle gates using underground motors meant that the design of the gates was unaffected and blended seamlessly with the driveway. Managing Director, Neil Sampson, oversaw the project and said: “This was a complex project but one we were able to complete to a very high standard for our clients. The detail involved was minute – down to the colour, texture and weight of the gates. Using laser technology, we were able to build these beautiful bespoke gates at the same cost of ‘off the shelf’ ones – and we’re looking forward to taking other clients’ designs from their sketchpads to their front gates.”