A picture painted of three problems by Saatchi Gallery

Three problems were solved when Solar Gates worked with Triptych Logistics, on a secure unit where artwork from the Saatchi Gallery is stored when not on public view.

The company had approached several other suppliers for a solution but unable to find one to meet the brief, Solar Gates was contacted – and their trademark innovation came into play to meet all three areas of concern. “We approached a number of suppliers and not one of them could us give a satisfactory solution, let alone within budget.” explained CEO Rahul Gajjar. “At our wits’ end, Neil at Solar Gates understood the problem, immediately grasped the challenge and offered a positive, innovative solution - and within budget. Solar Gates were very professional at all times. We’ve now added tremendous security and value to the property. The installation has been favourably commented upon by our neighbours. The system works well for staff and deliveries, in and out of hours use, and our security insurance is completely satisfied.”

The solution was to divide the compound into two areas – one for loading and one for staff/visitor entry. The staff/visitor area was easily solved with a relatively straight-forward cantilever sliding vehicle gate, with separate automated personnel gate, constructed from anti-climb prison mesh, delivered on-site with the Solar Gates ‘ready to roll’ approach to keep installation time to a minimum. 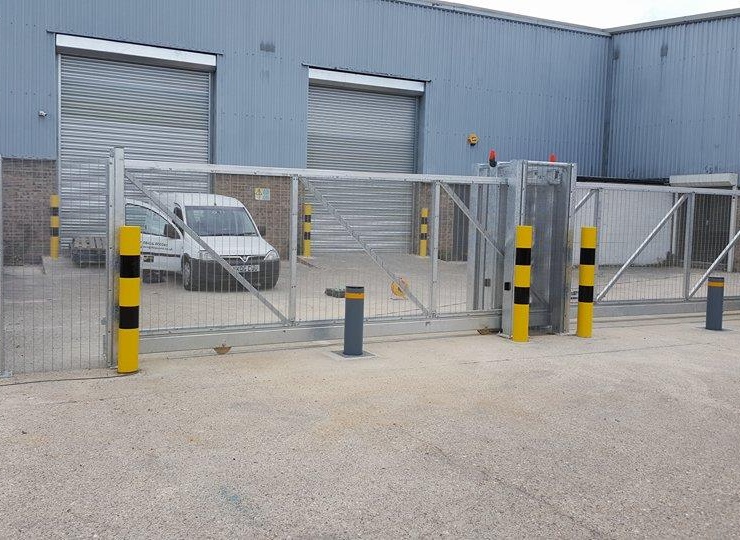 A further security measure was added – a rising anti-ram bollard, plus the fence sections are protected by hi-vis static bollards and Armco barriers. Staff can gain access via their mobile phones. The loading bay presented a bigger challenge, requiring an interlocking sliding security system.

Neil Sampson, MD of Solar Gates UK, explained “We needed to allow for large vehicles to reverse into two loading bays and then be locked in. The problem was that space was tight and a budget had to be met. We developed a bespoke and elegant solution - two overlapping sliding gates with internal 1500kg motors. The restriction was that the vehicles had to enter the compound one at a time, but this solution allowed two 5 metre sliding gates to operate in an 11-metre space. The hold-to-run gates are again further protected with anti-ram bollards and prison mesh fencing".

Not only were the logistics problems solved, but security was very much improved too, with the additions of the anti-ram bollards.