Kier Living acquired the former Rushden hospital site and quickly began work to develop 250 homes and convert the old listed hospital buildings into luxury flats. But the site was in a heavily built up area of Rushden with work site boundaries on existing residential land with a doctors’ surgery and pharmacy just outside the main delivery entrance. Site traffic and working times had to be carefully planned and managed to ensure the general public was not endangered or inconvenienced.

“The main site entrance was controlled during the day time with a full time security guard in a security hut” explained Martin Harvey, senior site manager for the Rushden development. “Given the proximity to members of the public including young and elderly patients from the surgery, we had no alternative. The SOSEC barrier has completely removed the need for the hut and manned security during the day. Not only have we saved that cost, the member of staff there has been redeployed elsewhere on the site doing productive work – so the savings are more than we have stated”. 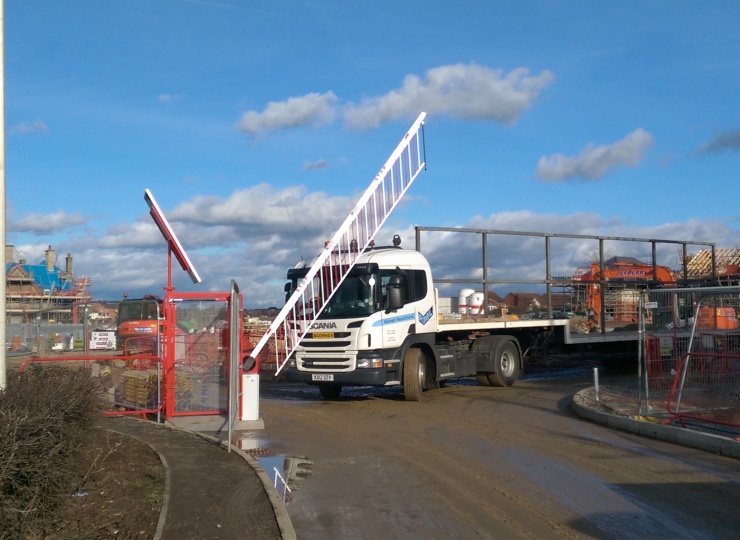 Developed by Kent-based Solar Gates UK, solar power and power storage is the unique element of SOSEC mobile barrier. A high-capacity solar panel allows the barrier to operate up to 900 times per day – even in a British winter. The SOSEC barrier and gate combines a fast action 5m traffic barrier with rugged, locked and self-closing pedestrian gate ensuring it is safe for pedestrians and meets the BS/EN 13245 standards. “As part of the SOSEC family of products, the solar security units are available in the combo, as used with Kier sites, or the vehicle barrier or pedestrian gate solo versions to suits various needs across various industries such as mining, retail, events or highways uses” explains Neil Sampson of Solar Gates UK and inventor of the SOSEC brand. Access control for users can be as simple as remote control operation through to GSM or Bluetooth control through to swipe cards, codes or even coin collection for access.

“We were highly sceptical at the beginning that the solar barrier would actually even work. But very quickly, it just became part of the perimeter security and we were safe in the knowledge that the site was secure and safe from the general public. Several months since initial delivery, the barrier has been moved around the site as we complete houses and the boundary changes. The SOSEC mobile solar barrier has allowed us to make considerable saving on our site security costs, we certainly would not want to go back to the old, labour intensive, methods of securing the site” concludes Martin Harvey.