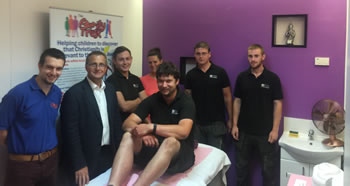 Today, (Friday 29 July) one of Green Gate Access Systems' top installers drastically changed his signature look, as part of a series of fundraising feats for local charity, The Family Trust.

Dave Gammon, who has worked for the Park Wood-based security specialists for seven years, sat in the chair at Panache Beauty in The Mall, Maidstone, as he had his face shaved, before undergoing a painstaking leg wax.

This is the most recent charitable activity undertaken by the employee at the Bircholt Road security specialists in the last few months, after he travelled thousands of miles across India and climbed the UK's highest mountains to raise money for the Maidstone-based charity.

Dave's efforts have so far raised more than £580 for the Trust - which Green Gate Managing Director, Neil Sampson, said he would match should his employee undergo the hair removal challenge - therefore taking the grand total over £1,000 - smashing the target of £500.

The 25-year-old said, “I wasn't so keen on losing my beard when it was first mentioned, but when Neil said he would match the money I have raised, it was a no-brainer. Initially we planned to have my face waxed, which would have proved extremely painful. Luckily no salons were keen to do that - so we made a compromise and agreed that I'd wax my legs instead.”

In May, Dave spent 12 days driving an auto rickshaw more than 2,800km (1730 miles) across India before tackling the main event in June - a mammoth task of taking on the Three Peaks Challenge - tackling Ben Nevis, Scafell Pike and Snowdon.

Dave has always lived in Maidstone, and attended the boys' grammar school in the town, and feels it's important to contribute to local charities. 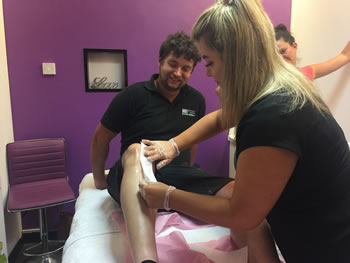 He said, “The Family Trust does fantastic work for children and schools across Kent, it is a pleasure to raise money for such a great cause. I've seen some amazing things during my fundraising efforts - something I would do again in a heartbeat.”

Neil Sampson, Managing Director at Green Gates Access Systems, which recently celebrated its 10-year anniversary, said, “At Green Gate we're a family and we encourage all of our staff to get involved in projects such as this. Dave is an incredibly hard working and loyal employee and we're very proud of the work he does. We are more than happy to match his target, doubling the amount raised for a great cause - we wish him the best with his next challenge.’ 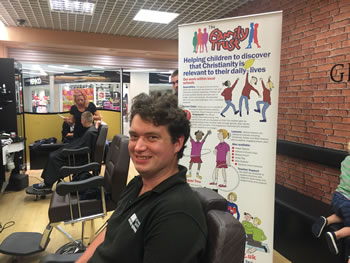 ’I'd also like to extend my thanks to all staff at Panache Beauty in The Mall, who waived all charges for Dave's makeover.”

Alex Clark, Executive Director at The Family Trust, said, “He's a glutton for punishment because of all the efforts he's put himself through in this year alone - we want to thank him for all his hard work, he's certainly set the bar high for other volunteers!”

Visit tinyurl.com/davegreengate to find out more, or to donate.