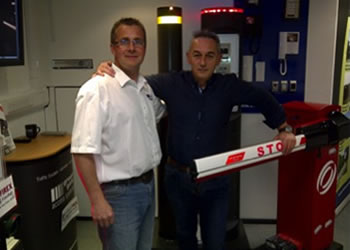 Green Gate Access Systems are delighted to announce that they will be introducing the new O&O K12 anti-terrorism bollard to the market, named ‘The Oak’, following its UK crash testing and approval by MIRA.

Italy-based O&O’s CEO, Stefano Valzania, flew into the UK last week to collect the K12’s Certificate of Conformity and in addition, meet Green Gate Access Systems’ managing director, Neil Sampson, to discuss the newly authorised product, which is the most cost-effective K12 rated bollard on the European market.

In the UK, the Centre for Protection of National Infrastructure (CPNI) has been leading the Government’s initiative in all aspects of counter-terrorism protective security in conjunction with BSI.

These specifications are now widely used throughout UK, Europe, India, the Middle East and other parts of the world, to specify the type of barrier required against a particular type of threat. 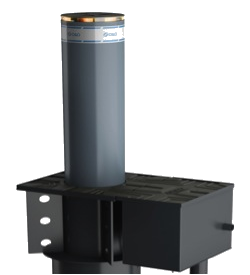 The revised K12 standard is now the result of an amalgamation of the five different previous standards of global approval and at the new 1.2 metres height (as opposed to the older version standing at 0.8 metres high), is considered the safest anti-terrorism bollard in the world.

“We are delighted to represent O&O in promoting the new K12 bollard and are already taking international orders for this.’ said Neil Sampson. ‘A terrorist attack can take place in any country and we are expecting a high level of interest from establishments such as airports, embassies, storage facilities and government offices both across the UK and overseas.”

“It was good to meet once again with Neil Sampson at Green Gate Access Systems, with whom we have been working for several years.’ said Stefano Valzania. ‘There are ambitious plans in place for the success of the Oak K12 bollard and we are dedicated to progressing these together. I look forward to a positive relationship with Neil and his team for many years to come. The O&O brand is moving forward into new markets and Green Gate Access Systems are a great partner to help us achieve that in the UK.”

For more information about O&O’s K12 bollards and security products, please contact us by calling 08456 800269.