Unlocking the Answer to Livestock Security

Securing property boundaries and access routes for clubs and yards can be tricky, especially with horse boxes, suppliers, vets, grooms and players coming and going at all times of the day - and even after dark. Standard five-bar farm gates do the job well enough, but with a high volume of traffic, equine and vehicular, gates are often left open or not secured properly.

They are also vulnerable to being opened at anytime, despite padlocks and chains.

In the April 2015 issue of Polo Times, their resident legal columnist, Lottie Goldstone, took a look at the implications of loose horses and how accidents caused by polo ponies on the main public highway could spell legal and financial disaster for the owner. 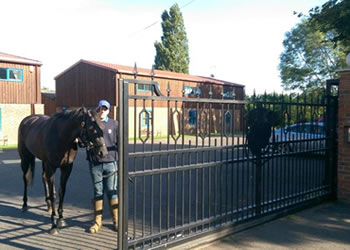 Lottie said, “Case law has shown that the courts tend to favour the innocent party, i.e. the driver, who may potentially be seriously injured by the collision with the escaped animal. If, for example, the horse had taken fright and trampled through fencing or jumped out on to the road, and this did not result from any negligence of the owner, then one would look to the Animals Act and consider where and how strict liability will therefore be attached.”

With all legal lawsuits, the Court of Law will always consider all the actions of the parties involved and how they have taken steps to prevent such situations occurring.

Installing electric gates for your yard would solve the issue of open access to any yard. Electric gates can be programmed to be opened by sensors during specific times of the day, or only to be opened with keypads, mobile devices or only from inside the property. Electric gates would do away with any worries about other people closing gates behind them, or uninvited visitors chopping through chains to help themselves to the contents of your tack rooms.

If you are a livery yard or polo club owner that offers boxes or paddocks for rent to your members and players, then the onus may still be on you in the event of a accident involving escaped ponies.

Security - No Mains, No Problem

Many rural locations for yards, clubs and polo schools will have electricity, but not necessarily cabled as far as the entrance to the property. Extending mains power even 50 metres, is both expensive and time consuming - not to mention intrusive as it invariably involves digging up tarmac.

In many cases, providing power for electric gate installation is the most expensive part of fitting a security gate.

“At Polo Times’ own rural premises, this was the exact problem that we faced.” Nick Hine explained. “We have horses on site 24/7, being exercised at different times of the day, whilst people and vehicles, are coming and going throughout the day. But, we needed to get power over 100 metres from its source in the office, to the end of the drive. Quotes came in between £1,500 - £2,000, just to get power to where we needed it. Everyone said that the digging up the tarmac and running armoured cabling to carry the mains supply was the only option.’

‘Not wanting to accept defeat, on the spur of the moment, fortunately, I made contact with Solar Gates UK Ltd (and sister company Green Gates Access Systems). After a few minutes on the phone talking through our power supply concerns, I quickly realised that their solar power provided the perfect solution - not only was it more cost-effective in the short term, but in the long-term its power supply was totally free... so of course, it is better for the environment too.” 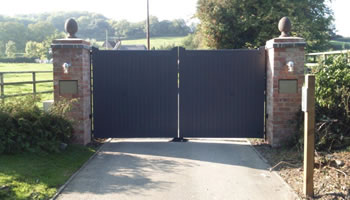 Nick added, “Solar Gates UK's whole team have been nothing but exemplary; from the first phone call that I made when they initially discussed and costed up just how their systems really would work for us, to its successful install, nothing has been too much trouble... and as is evidenced by the photo, it really does work!”

Green Gates Access System’s solar systems will operate a gate up to 200 times a day even on the darkest day in a British winter! It is assumed on this power consumption that any gate will be fitted with a GSM intercom and exit loop as standard (most installations have these accessories as a minimum) and the solar systems are rated to cover this in their energy calculations.

In short, the solar option allows security to be fitted to the most remote locations.

Neil Sampson, founder and Managing Director of Solar Gates UK Ltd said to Polo Times, “Solar powered gates are perfect in remote locations or shared power situations and can be upgraded with ease, depending on how busy the entrance is.

We can offer equestrian owners massive cost savings when mains power is more than 50 metres away from the gate. With a solid two year warranty on all products, we offer an unprecedented further 8 years return to base warranty on our gate motors.”