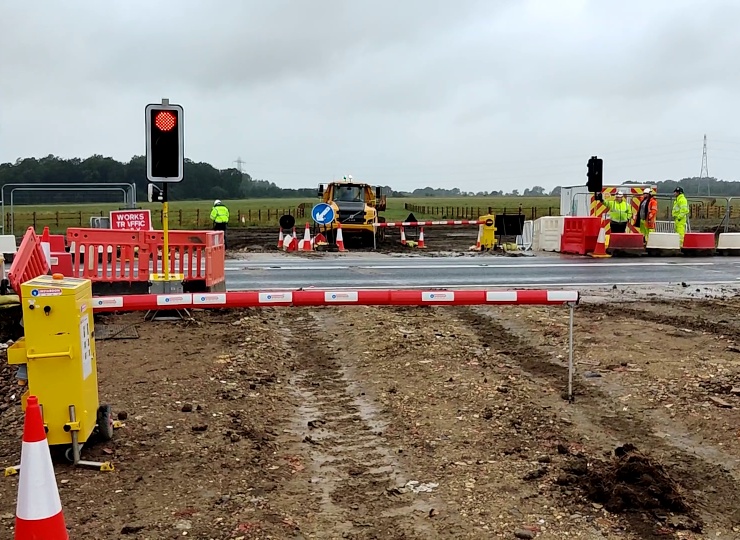 Realising that none of the standard temporary traffic signals on the market had the ability to integrate with third part equipment, the Solar Gates team had to get out of the box and come up with a work around with fail safes. Once a protype crossing had been proved and installed, the ELOR site rolled out the solution to both haul route crossings using 8 INSTABOOM barriers and 16 traffic lights. ‘Our final solution changed what the traffic signals manufacturer saw as a complicated scenario to a very simple and inexpensive solution. We simply connected the standard INSTABOOM anti-incursion barrier to the green light, facing construction traffic, to open the barriers when it was safe to do so’ explains Christopher Long, Operations Manager, Solar Gates UK.

‘Working with the Solar Gates team on this site was just what I needed’ explains Jim Ditchburn, site manager, Balfour Beatty, ELOR. ‘We had the traffic light controls in place, but needed to add additional safety to prevent the chance of drivers of large construction vehicles missing the line of sight to the standard traffic lights. After a short meeting on site, the INSTABOOM team rigged up a work around in under an hour and we had our answer. Within 2 weeks, we had converted both crossings to barrier controlled traffic lights and had a much safer site as a result’ concluded Ditchburn.