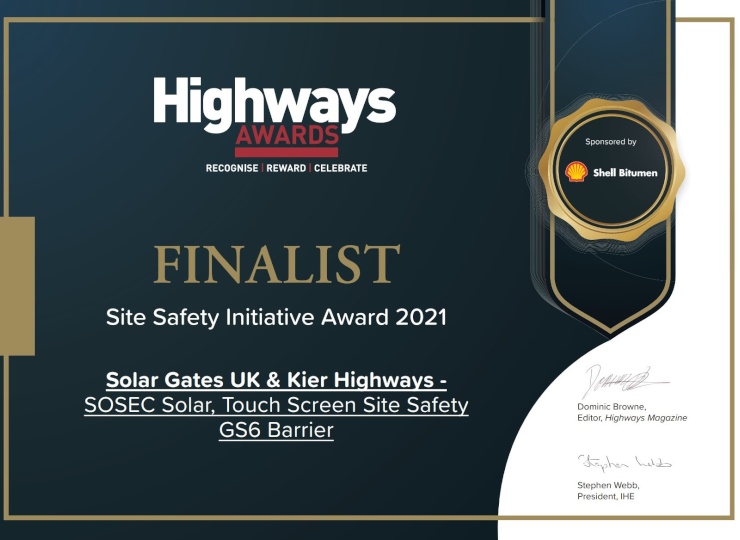 Solar Gates UK are delighted to announce they have been shortlisted for not 1 but 2 Highways Awards, ‘Highway’s Industry Product Of The Year’ and ‘Site Safety Initiative Award’.

Solar Gates UK are ever committed to improving safety of the highways, we are constantly innovating with key partners to make sure safety is consistently improved upon year on year.

Our nomination for ‘Highway’s Industry Product Of The Year’ is with partners Balfour Beatty and their maintenance teams, managed by Connect Plus Services. They had a daily problem that they needed help with. Protection - to the correct standard - of low hanging high voltage power cables and overhead structures. With every second accounted for Connect Plus needed to see a radical improvement of the GS6 standard pole and tape set up, which they saw as deficient in its ability to actually prevent strikes, as well as a radical improvement in the time taken to deploy such a set up.

Solar Gates UK developed INSTABOOM Lite and Wireless GS6 to meet the problem head-on. Both products are light enough for a two-person deployment, without a tail-lift, and can be set up in minutes. Both units are fully solar powered, the GS6 detector uses a laser scanner to detect any over-height vehicle and signals an automatic lane closure using the INSTABOOM Lite barrier, up to 60m in front of the detection. An audible siren and beacon warn the workforce and instant email alerts are sent to inform the management team. There have been no incidents with over-height vehicles in the works since the barriers have been installed.

We gained the nomination for ‘Site Safety Initiative Award’ with Kier Highways and our development of a brand new safety exit system for the A585 RDP team at Windy Harbour. Kier Highway’s had a problem that posed a major safety risk to road users at various works access points of the 6km project. With low hanging power and telecoms cables spanning several exits and all access points pulling onto busy trunk roads, there were risks that site vehicles could leave compounds in an unsafe or unsecure condition. After cable strikes on another projects, Kier needed to see a radical improvement of the safety and protection over the standard GS6 arrangement, which they saw as deficient in its ability to actually prevent strikes.

Within just four weeks, the SOSEC team deployed a twin solar powered barrier with touch screen panel to control the traffic in and out of the compound. The exit panel requires the driver exiting the compound to stop and answer 4 simple questions about his vehicles’ fitness to proceed, before the barrier will open. The simple action of requiring the driver to leave his vehicle, creates the time and space for them to ensure a final visual check of their load before pulling onto the network. An over-height detection laser confirms at least one of their answers and the remaining onus of safety is placed into the hands of the driver. There have been no incidents with vehicles exiting unsafely since the barriers have been installed. 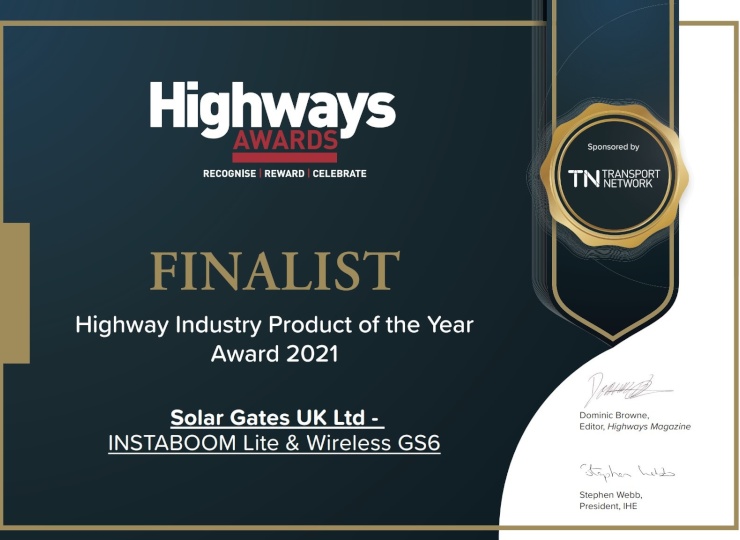 Managing Director of Solar Gates UK, Neil Sampson says ‘I am immensely proud of what we at Solar Gates UK are able to achieve with our partners Balfour Beatty, Connect Plus Services and Kier Highways. At Solar Gates UK we have a united passion for protection and safety of the highways and its very valuable workers and users. I am incredibly proud to be shortlisted for not 1 but 2 prominent Highways awards it means a great deal for us to be stood side by side with some of the biggest organisations in the highways industry and developing new products alongside them.’